Baraboo, WI – For more than 40 years, many organizations and agencies have been working to bring back the Whooping Crane. Today, their majestic presence and unique haunting call are slowly re-emerging on the landscape – including eastern Kentucky.

The Whooping Crane’s recovery is one of conservation’s most inspiring stories. Back from the brink of extinction, Whooping Cranes are making a steady comeback from a low of only 21 individuals in the wild in the 1940s, to less than 500 birds in the wild today. Named for their loud and distinctive calls, Whooping Cranes once lived throughout much of North America.

The International Crane Foundation, working with other member organizations in the Whooping Crane Eastern Partnership (WCEP), has been instrumental in painstaking Whooping Crane conservation efforts in the Eastern flyway, from Florida to Wisconsin.

The young cranes are released near wild Whooping Cranes so they integrate into the flock and learn to migrate south for the winter. Then, in the spring, the young cranes migrate north again with the wild flock to spend their summer in Wisconsin.

Sometimes, however, young cranes meander a bit. Such is the case with a Whooping Crane released last fall. Tracking and visual confirmation indicate that he is in eastern Kentucky. What can you do help him as he finds his way?

•  Learn to identify Whooping Cranes in the wild. Whooping Cranes have a white body, with red on top of their head and black marks running along their cheeks and throat. They also have black wing tips. 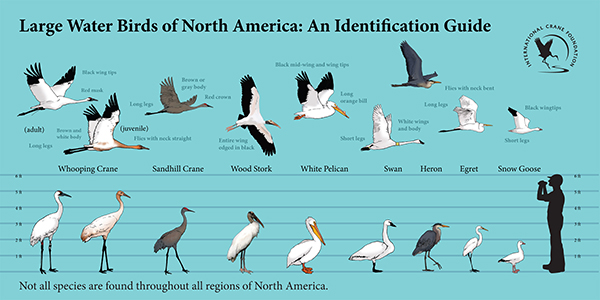 •  Give Whooping Cranes space and appreciate them from afar. If you encounter a Whooping Crane in the wild, please give them the respect and distance they need. Do not approach birds on foot within 200 yards. Remain in your vehicle. Do not approach in a vehicle any closer than 100 yards. Also, please remain concealed and do not speak loudly enough that the birds can hear you. Finally, do not trespass on private property in an attempt to view or photograph Whooping Cranes.

To learn more about Whooping Cranes and the other 14 cranes supported through the work of the International Crane Foundation, go to at www.savingcranes.org.